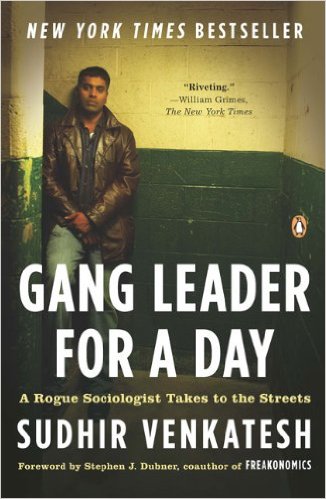 I discovered this book of Sudhir Venkatesh through the reference in the book by Stephen J. Dubner and Steven Levitt Freakonomics.

It’s a memoir of the period of time the author were living in the ‘projects’ of  Chicago. While in his studies of sociology he was suggested to attempt a study of the structures of the live in a gang dominated neighbourhood in Chicago.

What’s the “Gang Leader for a day” about

In the years that Sudhir Venkatesh walks the getto, he finds an intrincate economical and social structure. In the “projects” the gang that control the area, the ‘Black Kings’ in this case, is deeply integrated in the comunity.

Venkatesh discovers that the gang not only extract money from the comunity, but it gives back in different ways. He shows that the gang offer security in an area that police rarely visit except after crime has been commited. But the gang leader works as a kind of judge, that rules over disputes in the comunity and enforces the arrangement.

The gang is like a local industry were the youngsters can find a job to get by as “soldiers”. But the gang, we discover, doesn’t hire anyone that appear at the door. Venkatesh shows that the gang is a complex structure, with different managing levels, ruled by the gang leader, that works like a CEO. This illegal enterprise put to work marketing strategies to price and offer the product, has a logistics operation and a financial department.

The members of the gang are subject to a area manager, that’s supervised by the high management. This area manager has to be able to work independently the part of the business he has been assigned. That means not only to price the product accordingly to the market, but to defend against the competence.

Later on, we discover that in fact even the gang leader is part of a bigger structure accross the united states that links all the Black Kings franchises.

Why I find this interesting?

It discovers some of the tricks needed for living between the poorest of the society.

For example, the mothers took the child out to pee in the stairs so that hookers and drug addicts don’t use the stairs for their business. Or that the fathers of the families had to hide when social workers passed by to check, because most mothers say that they are single mothers to enjoy more social benefits.

But the neighbours not only have to hide their income from the State, but from the gang too. All the activities (legal and illegal) are subjected to a tax by the gang.

Overall I find it an interesting book, thought it’s more about the personal experiences rather than on providing the conclusions of his study. That, I expect, will be in his books American Project. The Rise and Fall of a Modern Ghetto (2000) and Off the Books. The Underground Economy of the Urban Poor (2006).

A more recent book, that seem quite interesting is Floating City: A Rogue Sociologist Lost and Found in New York’s Underground Economy. That one talks about his experience with the gangs of New York, were he continued his investigation after leaving Chicago due a offer of a position in the Columbia University.