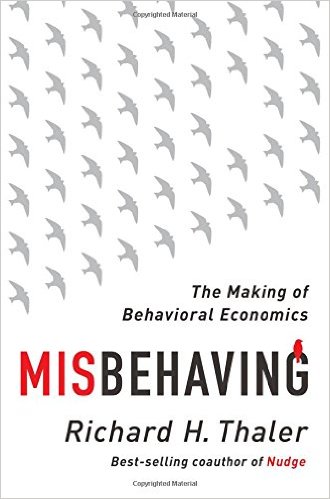 A very interesting audiobook, it’s organized like an intelectual autobiography as Carnap’s or my favorite, Feyerabend’s. This book follows chronologically the advances in the developing of the branch of “Behavioral Economics” by one of the founders of the discipline, Richard Thaler.

The birth of behavioral economics

The book traces the steps of the author from the perplexity in front of a irresoluble problem fron the usual economic point of view, towards taking a different perspective on economics. This new perspective leaves the classical theory and assumes that economics has to talk about real people, not theoretical homo economicus.

The focus of his work is that the homo economicus doesn’t exist and it’s not an adecuate way to analyze the problems that emerge in microeconomy. People don’t work according to logic and don’t follow the most rational way to solve the problem of economics.

The behaviour of the individuals is not ruled by the logical and rational approach that the classical theory of economics used to apply.

Thaler propposed that an interdisciplinal approach would work better and provide more exact, and useful explanations on the real conduct of the individuals.

What I liked most about this book…

It’s quite captivating to see that Richard Thaler recognized the limitation of his knowledge on certain areas and that he either devoted time to introduce himself in the area -psicology- or joined with an expert -for example in the case of his interest in finance-.

Another compelling aspect of this book is to see that he started beign an outsider or a rogue economist, and end up founding a new discipline of economics.